Choose to Add Unlimited Beer, Wine and Cocktails, Wi-Fi, and Gratuities from $79 per Guest, per Day on All Sailings

*Promotion is subject to availability, may not be combinable with certain fares or other amenity offers, is capacity controlled and may be withdrawn at any time. Other restrictions apply.

*Promotion is subject to availability, may not be combinable with certain fares or other amenity offers, is capacity controlled and may be withdrawn at any time. Other restrictions apply.

READY TO PLAN YOUR SHORE EXCURSIONS?

Dún Laoghaire is a suburban seaside town and seaport nestled at the foothills of the Dublin Mountains in Ireland. The port offers opportunities for biking, canoeing, hiking, clay pigeon shooting, sailing and rock climbing. There are also several music and cultural festivals during the Autumn.

Man is a 33-mile long island in the middle of the Irish Sea 60 miles west of England’s Lancashire coast. It is a Crown dependency with its own parliament, laws, currency, culture and postage stamps. Warmed by the Gulf Stream, it is a popular destination for English tourists. Man maintains a great deal of its Victorian-era transportation system, including a steam railway and horse-drawn trams. It is also home to one of the oldest motor-racing series, the Tourist Trophy, an important element in the development of automobiles and motorcycles. The island is known for its pastoral countryside, its woolens and, of course, its famous tail-less Manx cats. The island’s flag holds The Three Legs of Man: a symbolic figure made up simply of three legs joined at the hip, the knees bent as if running. This fulfills the kingdom’s defiant motto, which, loosely translated says: “Whichever way you throw me, I stand.

Portrush, town in . Situated on the north coast of County Antrim, Northern Ireland, on a promontory jutting into the Atlantic Ocean, Portrush is a popular seaside resort with a small harbour and two long sandy beaches. Many visitors come to play golf, and Royal Portrush Golf Course has hosted major tournaments including the British Open. Much of the urban architecture is Victorian, including the red brick town hall. Dunluce Castle, whose ruins perch on a rocky headland about 5 km (3 mi) east of Portrush, was a stronghold of the MacDonnells, who ruled this area in the 16th century.

Tobermory, the primary town on the Isle of Mull, began as a fishing port during the latter part of the 18th century. However, in recent times the area has become an excellent destination for those interested in marine wildlife watching. The waters surrounding Mull are popular feeding grounds for dolphins, basking sharks and wales, Lucky visitors may also catch a glimpse of rare White-Tail and Golden Eagles that call the island home. Other popular sights in Tobermory include the Baliscate Standing Stones that still remain from one of the earliest settlements in the village, The Mull Museum and Aros Park.

As the main town along the Isle of Sky within the stunning Inner Hebrides of Scotland, Portree is quaint and unique, with colorful buildings, a lovely pebbled beach, green hills and a peaceful harbor. As it is a very small village, you can explore it easily by foot or bicycle.

The Orkney Islands are different from mainland Britain and reflect the original 9th century Viking settlement. In addition to Norse heritage are remains of prehistoric monuments such as Stenness Standing Stones at Finstown. Steep-roofed stone houses line streets winding around medieval St. Magnus Cathedral. A museum featuring Orkney artifacts is housed in 16th-century Tankerness House. Other attractions include Maes Howe, Britain's best-preserved megalithic tomb, and the stone-age village Skara Brae. Rock circles, cairns, standing stones, ancient tombs and prehistoric villages are scattered about, gaining these islands international recognition. Only the walls and tower of the 12-century residence, Bishop's Palace, stand. The top of the tower affords a great view of the cathedral and across Kirkwall rooftops. Earl's Palace dates from 1600. Its style blends medieval fierceness with elements of French Renaissance architecture - featuring dungeons, massive fireplaces and magnificent central hall. A good mile south of town is Highland Park - the "most northerly legal distillery in Scotland."

The northern part of Scotland, known as the Highlands, ranks as one of the world’s most magnificent scenic spots. Among the main attractions is a landscape of dramatic mountains and forested hills. Invergordon is the port for Inverness and capital of the Highlands. The surrounding countryside offers such famous attractions as the Battlefield of Culloden, Loch Ness, the villages of Tain and Cromarty, numerous historic castles and old established whisky distilleries. Enjoy the picture-perfect scenery and an opportunity to chat with a Highlander eager to introduce you to his fabled land and its rich heritage. Inverness Castle is a predominantly 19th-century edifice perched high above the Ness River. Today’s remains house the Sheriff’s Office. The exhibits of Inverness Museum and Art Gallery may be worth viewing as they provide a good overview of the development of the Highlands. Located 14 miles southwest of Inverness the Loch Ness Monster Exhibition tell the legend of the monster from 565 A.D. to the present.

Dominated by the ramparts of Edinburgh Castle, this picturesque city offers shopping on Princes Street, the grandeur of the Royal Mile, St. Giles Cathedral and historic Palace of Holyrood House, where Queen Mary lived and many Scottish kings were wed. Or venture across the moors to marvel at the scenic Highlands. 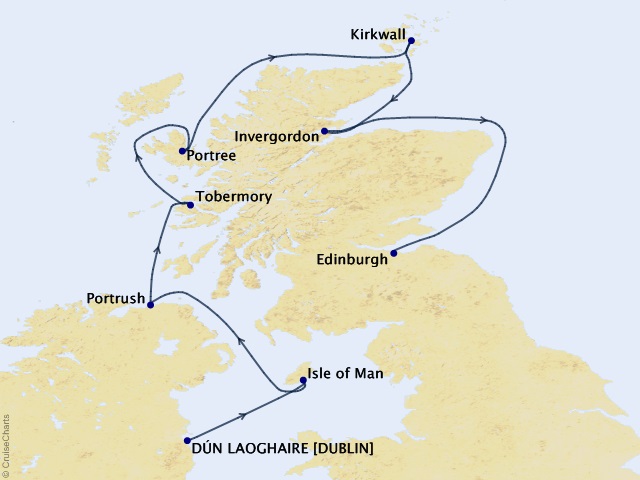 Itinerary subject to change without notice. Please confirm itinerary at time of booking.

Prices include non-commissionable fares. Government fees/taxes of $262, transfers, and airfare (unless otherwise stated) additional for all guests.

Prices are per person, based on double occupancy. Airfare, transfers, government fees and taxes additional.

All fares are quoted in US Dollars.

All prices per person and in USD unless otherwise stated.
Offer ID:
1449257

Reference this number when contacting our agency so we may better serve you. Also keeping this number handy will allow you to locate this document again quickly.

Information and pricing is subject to change without notice. While we do our very best to ensure that information and pricing appearing in this website is complete and accurate, we cannot be responsible for incomplete and inaccurate representations, which may or may not be under our control. In the event of a pricing error, misrepresentation or omission, we reserve the right to adjust the pricing or make any other corrections.