Mahé, being the largest of the Seychelles islands, beckons with Creole restaurants, craft shops and art galleries. The nearby waters surrounding Mahé are perfect for swimming, body surfing and snorkeling.

La Digue is a delightful island oozing with refreshing old world charm. Transportation by bicycles and ox-carts preserves peace and tranquility. For nature lovers, the gigantic granite boulders or the near extinct Black Paradise Flycatcher is reason enough to explore this fascinating island.

Antseranana (Antsirenana or Diego Suarez) is a cosmopolitan seaport overlooking a breathtaking gulf. The many lakes, waterfalls and grottoes in the rainforests make this an excellent place to explore the natural beauty and wildlife of Madagascar. The nation’s other trademark, historically, is pirates. In the 17th century, an estimated one thousand pirates were resident on the island’s east coast, and left behind hundreds of rotting wooden wrecks as a reminder. You can visit them on dug out Pirogue canoes, which glide smoothly through the sparkling, sandy waters.

Pointe des Galets is a volcanic island lush with palm trees, rain forests and an abundance of flowers and tropical fruit trees. Enjoy the Creole-flavored French culture and the sophistication of downtown Paris in a tropical climate. Hike through the challenging volcanic mountains and enjoy the panoramic views of the rainforest from scenie vistas.

This mountain-backed capital bustles with big-city commercial activity by day, and by night is quiet - except for Le Caudan Waterfront, with a casino, cinemas, shops, bars and restaurants. There's a Chinatown and a distinct Muslim area around Muammar El Khadafi Square. The city center is easily walkable. A good place to get a feel for city life is Port Louis Market, near the water in the heart of downtown. The Natural History Museum houses a stuffed replica of the dodo, which has been extinct since late 17th century. Visit the Mauritius Postal Museum, stop by Port Louis' oddly located Jummah Mosque, and admire Fort Adelaide, which so closely resembles a Moorish fortress locals call it the Citadel. The views from Fort Adelaide's hilltop and harbourside location are amazing. Père Laval - who is said to have converted more than 67,000 people during his 23 years on Mauritius - is remembered with a colourful plaster statue atop his tomb and shrine. Pilgrims swear by the statue's healing powers and many come to touch it.

Mahé, being the largest of the Seychelles islands, beckons with Creole restaurants, craft shops and art galleries. The nearby waters surrounding Mahé are perfect for swimming, body surfing and snorkeling. 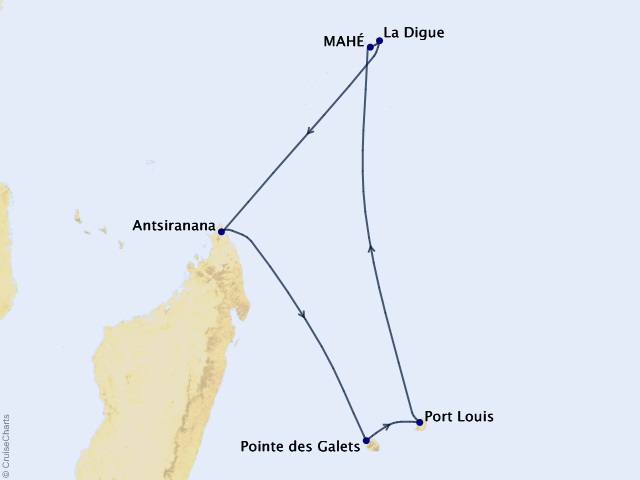 Itinerary subject to change without notice. Please confirm itinerary at time of booking.

Cruise Only Fares are in US dollars, per person, based on double occupancy.

All fares are quoted in US Dollars.

All prices per person and in USD unless otherwise stated.
Offer ID:
1467297

Reference this number when contacting our agency so we may better serve you. Also keeping this number handy will allow you to locate this document again quickly.

Information and pricing is subject to change without notice. While we do our very best to ensure that information and pricing appearing in this website is complete and accurate, we cannot be responsible for incomplete and inaccurate representations, which may or may not be under our control. In the event of a pricing error, misrepresentation or omission, we reserve the right to adjust the pricing or make any other corrections.